This Stretch of the River 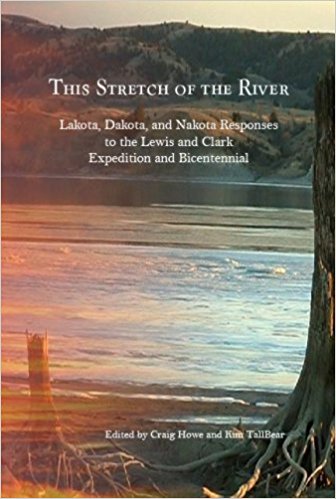 This Stretch of the River, produced by the Oak Lake Writers’ Society, crosses a variety of genres, including poetry, memoir, and historical and critical essays. The writers–all Lakota, Nakota, or Dakota–hail from South Dakota, and their work “speaks back” to the bicentennial of the Lewis and Clark Corps of Discovery Expedition. The writers offer fresh perspectives on Lewis and Clark, and not simply in contrast with non-tribal writers. Each develops a personal and unique comment on the political and ethical nature of the Corps of Discovery. What unites the collection is that each contribution troubles the common and simplistic interpretation of Lewis and Clark: that the two were heroic men who embarked with a multi-cultural crew on a virtuous journey at the behest of an idealistic young nation. For the Oak Lake Writers, the Missouri, or the Mnisose in the Lakota language, is at the center of the story. The Corps of Discovery rode in on the Mnisose – a powerful, living entity – with often unexamined consequences for the native peoples and places, plants and animals. And the ripples left in the wake of the Corps’ keelboat and canoes can still be felt today.